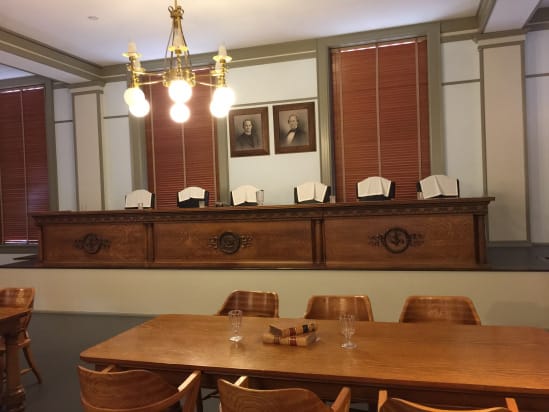 The Florida Supreme Court is the highest court in the U.S. state of Florida. It consists of seven members—the chief justice and six justices. Five members are chosen from five districts around the state to foster geographic diversity and two are selected at-large.

The Supreme Court justices are appointed by the governor to set terms that do not exceed six years. Immediately after appointment, the initial term is three years or less, because the justices must appear on the ballot in the next general election that occurs more than one year after their appointment. Afterward they serve six-year terms and remain in office if retained in the general election near the end of each term. Citizens vote on whether they want to retain each justice in office, or not.

Established upon statehood in 1845, the court is headquartered across Duval Street from the state capitol in Tallahassee. Throughout the court’s history it has undergone many reorganizations as Florida’s population has grown.

Joe Bodiford handles criminal appeal cases all over Florida. Call or text 850-222-4529 or use our online form to schedule a consultation.  Let’s see what we can do to help you in your situation.  Consultations are a no cost to you.